Understanding the interaction between oxides and water is critical to design many of their functionalities, including the electrocatalysis of molecular oxygen reduction. In this study, we probed the hydroxylation of model (001)-oriented La(1-x)SrxMnO3 (LSMO) perovskite surfaces, where the electronic structure and manganese valence was controlled by five substitution levels of lanthanum with strontium, using ambient pressure X-ray photoelectron spectroscopy in a humid environment. The degree of hydroxyl formation on the oxide surface correlated with the proximity of the valence band center relative to the Fermi level. LSMO perovskites with a valence band center closer to the Fermi level were more reactive toward water, forming more hydroxyl species at a given relative humidity. More hydroxyl species correlate with greater electron-donating character to the surface free energy in wetting, and reduce the activity to catalyze oxygen reduction reaction (ORR) kinetics in basic solution. New strategies to design more active catalysts should include design of electronically conducting oxides with lower valence band centers relative to the Fermi level at ORR-relevant potentials. 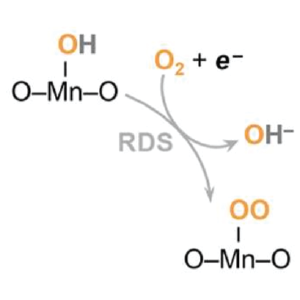