The prospect of enhancing the condensation rate by decreasing the maximum drop departure diameter significantly below the capillary length through spontaneous drop motion has generated significant interest in condensation on superhydrophobic surfaces (SHS). The mobile coalescence leading to spontaneous drop motion was initially reported to occur only on hierarchical SHS, consisting of both nanoscale and microscale topological features. However, subsequent studies have shown that mobile coalescence also occurs on solely nanostructured SHS. Thus, recent focus has been on understanding the condensation process on nanostructured surfaces rather than on hierarchical SHS. In this work, we investigate the impact of microscale topography of hierarchical SHS on the droplet coalescence dynamics and wetting states during the condensation process. We show that isolated mobile and immobile coalescence between two drops, almost exclusively focused on in previous studies, are rare. We identify several new droplet shedding modes, which are aided by tangential propulsion of mobile drops. These droplet shedding modes comprise of multiple droplets merging during serial coalescence events, which culminate in formation of a drop that either departs or remains anchored to the surface. We directly relate postmerging drop adhesion to formation of drops in nanoscale as well as microscale Wenzel and Cassie–Baxter wetting states. We identify the optimal microscale feature spacing of the hierarchical SHS, which promotes departure of the highest number of microdroplets. This optimal surface architecture consists of microscale features spaced close enough to enable transition of larger droplets into micro-Cassie state yet, at the same time, provides sufficient spacing in-between the features for occurrence of mobile coalescence. 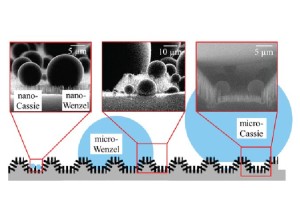